If you only use Pinterest occasionally, you may have missed out on some exciting Pinterest updates the social platform has recently rolled out…

Pinterest is one of the best social media marketing networks for driving traffic. That’s because each post, or rather “pin”, has a shelf life of up to three months. By contrast, a Facebook post has a shelf life of approximately 3 hours and a tweet on Twitter reaches its full potential just 24 minutes after being published.

Some brand creators spend hours uploading dozens of meaningful, high-quality posts each day. While it is important to stay active on the site, Pinterest gives priority to the first five pins you post.

Those five are distributed widely so you can grow your following and experience more traffic. That means if you have a new blog post you want to promote through Pinterest, don’t wait until the end of the day to schedule it. Instead, make it one of your first posts of the day and you’ll get a bigger surge of traffic.

Save Pins To Multiple Boards

Pinterest also introduced the ability to save a pin to multiple boards. This can be useful when you have overlapping boards. For example, if you have a puppy training website, then you may have a Pinterest board called ‘Puppy Nutrition’ and ‘Puppy Diseases’.

If you have a pin about gluten free puppy food, then it could be added to both boards. But keep in mind that Pinterest will rank the first board as the most important one. So, prioritize your boards if you’ll be posting to multiple ones.

The new ability to post to multiple Pinterest boards has resulted in some spamming. These users publish their images to boards that are not relevant to their topic.

An example would be posting a picture of hair care products to a board titled ‘Quilting 101’ simply because that board has good traffic. But Pinterest is cracking down on these attempts at spamming. That’s why you need to be sure the boards you’re using are relevant to your pin. Otherwise, Pinterest may remove the post or even ban your account.

Ability To Arrange Your Pins

Another new feature from the social media platform is the ability to arrange your pins on your board. Previously, older content appeared at the bottom of your Pinterest board. This could be troubling because it meant some of your best content could be positioned too low to be seen, resulting in few pins and less traffic.

Fortunately, Pinterest has addressed this problem. Now you can choose the order of your pins and re-arrange them however you like. To get the most out of this Pinterest update, focus on putting your best content at the top of your board. This makes it easy for users to click through to your website.

Some brands and marketers have a lot of content and information to include on their Pinterest boards. This meant they could have very long boards that could feel overwhelming to new followers.

To make it easier for long boards to get the same traction, Pinterest now allows brands to break their boards into sections. This can be helpful if you need to sub-categorize some of your content.

Pinterest is ideal for some niches but not good for others. In particular, Pinterest is well-suited for events and holiday businesses. If you’re in the wedding or graduation niches, then Pinterest can be a wonderful source of traffic.

Another demographic that Pinterest appeals to is the do-it-yourself (DIY) audience. These users love pinning crafts, recipes, and art that they want to try out in their spare time.

You can also see good traffic if you’re in a niche that requires planning. Niches like home décor or gardening often need advanced preparation. So, publishing a seed guide 20-40 days before spring can result in plenty of traffic for your website.

Following these Pinterest updates could mean a lot more traffic to your pins and then more clicks to your website. 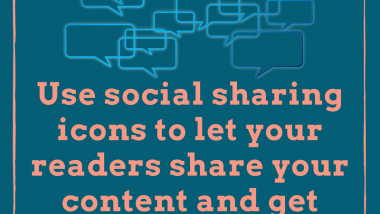 Must Have Freebie For Social Media Marketing